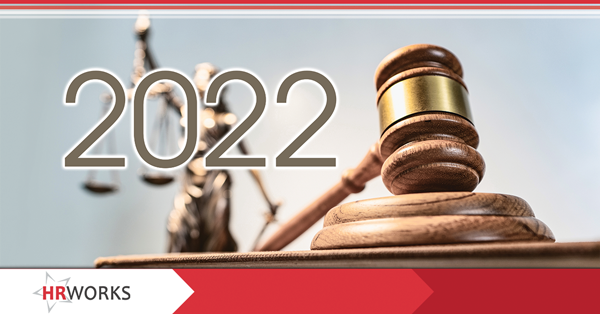 COVID-19 workplace safety and health measures remain one of the dominate issues for federal agencies; but employers should also be aware of other measures that have been or are under consideration by federal agencies and how they may impact the legislative landscape throughout 2022.

US Department of Labor (DOL) Agenda

The DOL is comprised of several divisions including the Wage and Hour Division (WHD), the Occupational Health & Safety Administration (OSHA), the Office of Federal Contract Compliance Programs (OFCCP), and the Employee Benefits Security Administration (EBSA). The highlights of the Regulatory Agenda for these individual divisions are outlined below.

In 2021, the DOL reversed some of the prior administration’s policies including the rescinding of the DOL’s 2020 Joint Employer Rule, changes to the Tip Credit Rule, and the withdrawal of the 2021 Independent Contractor Rule. In 2022, employers should expect continued changes. The DOL’s Regulatory Agenda, specifically, signals proposed changes to the Fair Labor Standard Act (FLSA) and overtime exemptions.

The WHD plans to issue a Notice of Proposed Rulemaking (NPRM) in April 2022 to raise the salary level for the FLSA’s executive, administrative and professional exemptions (EAP exemption), which is currently $684 per week. According to SHRM, it is speculated that the administration may work “to establish a higher threshold that is regularly updated.”

Under the FLSA, workers must be paid one and half times their regular rate of pay for all hours worked over 40 in a workweek, unless they meet an exemption. To qualify for an EAP exemption, employees must perform certain duties, be paid on a salary basis, and meet a minimum salary threshold.

Prior to establishment of any changes to the salary threshold, interested parties including employers, will have an opportunity to comment on the proposal and alternatives.

If revived, in addition to, electronic submission of general summary data from Form 300A to OSHA, employers may be required to submit more detailed information from Forms 300 and 301, which includes specific descriptions of worker injuries and body parts affected by such injuries.

A key proposal made by OFCCP would amend the department’s investigation and pre-enforcement conciliation processes and require contractors to notify OFCCP when they enter into subcontractor arrangements as a means to better identifying covered subcontractors for audit and compliance investigation. The current proposal in the Regulatory Agenda would add language to Executive Order 11246 regulations to require contractors notify OFCCP when they award supply and service subcontracts.

The EBSA plans to amend the definition of “fiduciary” to “more appropriately define when persons who render investment advice for a fee to employee benefit plans and IRAs are fiduciaries” under the Employee Retirement Income Security Act (ERISA) by considering the practices of investment advisers and the expectations of plan officials, participants, and IRA owners who receive investment advice.

Other federal agencies also have proposed legislative changes or initiatives that could impact federal employment laws and regulations in 2022, including the Equal Employment Opportunity Commission (EEOC), the National Labor Relations Board (NLRB), and the Department of Homeland Security (DHS).

While the EEOC did not issued a formal regulatory agenda, as we reported last month, the EEOC will be focusing on ways to help ensure that tech tools used in employment decisions comply with federal anti-discrimination laws. EEOC Chair, Charlotte Burrows, stated, “artificial intelligence and algorithmic decision-making tools have great potential to improve our lives, including in the area of employment. “At the same time, the EEOC is keenly aware that these tools may mask and perpetuate bias or create new discriminatory barriers to jobs. We must work to ensure that these new technologies do not become a high-tech pathway to discrimination.”

In addition, on January 12, 2022, the EEOC announced the launching of the Hiring Initiative to Reimagine Equity (HIRE) which is a joint initiative between the EEOC and OFCCP intended to engage a broad array of stakeholders in expanding access to good jobs for workers from underrepresented communities and help address key hiring and recruitment challenges. HIRE will identify strategies to remove hiring barriers that limit opportunity along the lines of race, color, ethnicity, gender, LGBTQ+ status, religion, disability, age, and veteran status.

The EEOC and OFCCP will convene a series of roundtables and meetings to identify actionable strategies to promote organizational policies and practices that advance equity. The agencies will develop materials such as guidance documents or promising practice resources. These resources will promote evidence-based research and innovative initiatives aimed at embedding equity in recruitment and hiring practices.

The NLRB announced in its Regulatory Agenda that it plans to issue an NPRM to potentially revise the standard for determining whether two businesses are joint employers under the National Labor Relations Act (NLRA).

The Trump administration issued a Final Rule in 2020 establishing joint employer status only if the two employers share or co-determine the employees’ essential terms or conditions of employment.

It is unclear what the new joint-employer rule would be, but it is predicted that the NLRB will revert to the standard that previously existed under the Browning-Ferris decision, which does not require the alleged joint employers to actually exercise control over employment conditions, as long as the company possesses the authority to do so if it wanted to.

The determination of what constitutes joint employment under the NLRA is important because when two entities are considered joint employers under the NLRA, they both must bargain with their employees’ union and may be held liable for unfair labor practices committed by the other entity.

Employers can also expect the NLRB to be reviewing and considering changes to prior rulings on the following:

Any changes in these areas will likely make it easier for employees or unions to challenge workplace rules.

Due to the COVID-19 pandemic, the DHS extended through April 30, 2022, its temporary policy allowing employers to virtually inspect Form I-9 documents. Since March of 2020, the policy has been extended several times, which has prompted DHS to propose revisions to employment eligibility verification regulations for Form I-9 compliance by making forms of remote verification a permanent measure. The DHS is expected to issue an NPRM in June 2022.

On November 10, 2021, the DOL, the NLRB, and the EEOC announced a joint initiative to protect workers against retaliation. The initiative began November 17, 2021, citing, worker retaliation as a “persistent and urgent problem” in the workplace and indicate that retaliation cases have increased each year over the last 20 years.

The three agencies will cooperate to enforce federal laws that protect workers who raise their concerns or speak out about their pay, workplace health, and safety issues, discrimination, or other working conditions. The agencies’ concerted efforts will focus on:

The regulatory agendas are only a proposal of actions that may or may not come to fruition and/or may result in adjusted timelines for implementation, and immediate action is not required on the part of employers. However, knowing where the agencies are potentially headed is helpful to employers and allows them to track and consider how any of these actions may impact their business operations, if enacted. Employers also get an opportunity to weigh in on proposed legislation by explaining how a proposed action may impact their business or by raising important questions for consideration in the implementation of any final rules using the DOL’s comment period process.

Additionally, employers should take note of interagency initiatives as these are likely to result in increased enforcement efforts and potential determinations about non-compliance by more than one agency could increase the amount of civil penalties and fines employers may face if found to be in violation of a federal labor law.

Employers should monitor future communications from these federal agencies to learn more about their focus and priorities.

HR Works will continue to monitor these topics and provide more information as needed.